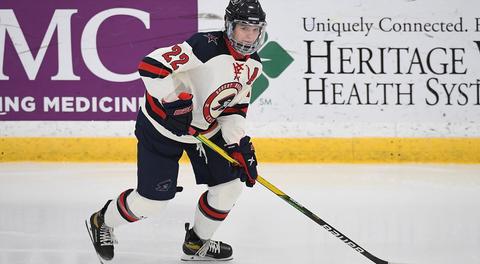 Go big or go home may not be an official Buffalo Beauts slogan,but one look at their 2021 NWHL Draft board and it’s clear that mission was accomplished.

A franchise record seven players were called by the Founding Four member who acquired an extra pair of third round picks in separate transactions with the Connecticut Whale and Boston Pride in exchange for the number one pick and a second round choice in next year’s selection process.

“We knew going into the off-season and preparing for this that we wanted to have more than just our five picks and I feel that we’ve been able to capitalize on that,” Beauts general manager Nate Oliver said during the NWHL’s live Draft Show on Twitch.“I’m very pleased with the selections that we’ve made.”

Navigating this unconventional year for identifying prospective players, as many would-be graduates will return to their collegiate programs for bonus eligibility, is a challenge that Oliver embraced.

“I think this draft was underrated going in,” he said. “There’s a lot of talent there to be had. It’s just a matter of leaving no stone unturned and looking for it.”

What Oliver found was a pair of Robert Morris University players in defender Emilie Harley and forward Anjelica Diffendal chosen second and seventh overall respectively. With the cancellation of the Colonials program they’ve both already committed to turning pro having signed NWHL contracts for Season 7.

“As a female athlete, just to be a part of a draft at all is pretty special so I’m really thankful that the NWHL and the Beautsgave me that opportunity,” said Harley. “I’m honored to be the Beauts first selection in the draft. It makes me feel like the coaches and the GM have the confidence in me to play a big role for the team. Out of all the eligible picks, the fact that Buffalo chose me just validates my goal to play at the highest level possible and makes me feel like all my hard work has paid off.”

The Syracuse, New York native recorded 46 points over 130 career NCAA games and wore an ‘A’ on her jersey as a senior. She’s known primarily as a defender but also has experience at center.

“Emilie has great vision and excellent leadership qualities,” said Colonials head coach Paul Colontino. “She is a very versatile player that is equally good at both forward and defense. She can quarterback a power play from the blue line and play center in the final minute of a game to help you win.”

Diffendal played 122 career games for her hometown RMU producing 40 points including 24 goals and 16 assists. Her offensive abilities could help spark the Beauts who scored the fewest goals-per-game in the NWHL during Lake Placid competition last season.

“Anjelica has exceptional, deceptive speed,” Colontino said. “She is a constant threat while on the ice to create breakaways and odd-man rushes. She has a great personality and love for the game, and is an excellent locker room presence.”

The Pittsburgh, Pennsylvania native also can’t wait to get started in Buffalo.

“I am most excited about getting the opportunity to be able to play at the next level and compete against some of the best athletes,” said Diffendal. “Buffalo has talented players and hopefully I will be able to contribute to the team’s success. They have a great organization and I am thankful for the chance to be a part of it.”

Ganser won a national title as a freshman in 2017 and accumulated 85 points over 112 regular season games in a four-year period before COVID-19 cancelled programming her fifth season. She’ll reunite with forward Autumn MacDougall who made history a year ago as the first USPORTS player ever selected in the NWHL Draft going 14th overall to Buffalo.

“Kennedy isn’t usually the biggest player on the ice, but she’s often one of the toughest,” said Pandas head coach Howie Draper. “She loves to compete and thrives in high pressure situations. She has the ability to contribute and have an impact in any role asked of her – PK, PP, defensive, offensive – she’ll take whatever role is given to her and make it her own. Finally, she’s a quiet leader who will earn the respect and trust of both coaches and teammates usually through her actions on and off the ice. Having said that, she knows and doesn’t hesitate to speak up when the situation dictates.”

Zíková, a native of the Czech Republic, also comes from a NCAA program familiar to the Beauts who chose star goaltender Carly Jackson from Maine with the third overall pick in 2020.

“Anna is a strong defender who has a high skill set, she angles players and is able to separate the puck from an offensive player at an elite level,” said Black Bears head coach Richard Reichenbach. “When she has the puck she is poised and able to slow down the play to make puck decisions.  She is one of few female players to play the highest level of boy’s hockey in the Czech Republic and has represented her country numerous times in world championships.”

Segall became the first player from Hamilton College ever selected in the NWHL Draft. During her last season of competition in 2019-20 she scored 22 points in 25 games as a Division III junior and was named to the All-NESCAC Second Team.

“Missy is an outstanding two-way forward and we are so excited to see her play at the next level,” said Continentals head coachEmily McNamara. “Missy’s speed through the neutral zone and skill in the offensive zone made her one of the top forwards in our league. She plays with a ton of energy in all facets of the game and we think she will be a great addition to the Beauts!”

The Beauts continued to make NWHL Draft history with their final two picks including fourth round selection Allison Atteawho became the first ever player from College of the Holy Cross to be chosen. The defender, who hails from Buffalo, had five points in 20 games as a senior in 2020-21 and led the team in shot blocks for the second straight season.

“Allison was a huge foundational piece to our team and defensive core at Holy Cross,” said Crusaders associate head coach Meredith Roth. “Her skating, play making, shot, and competitiveness helped drive our group on the back end. She strikes a perfect balance between skill, hockey sense, and physical play. Any team that drafts her is going to put themselves in a position to compete for a championship, by adding a strong, smart, physical player.”

To end the night the Beauts called on Casey Traill in the fifth round from South Shields, England and Castleton University. She’s the first British-born player to be selected and also her collegiate program’s first draftee. The Division III defender captained her club during the 2020-21 season and wrapped up a four-year career with 33 points in 93 games and was on the NECH All-Academic Team in each year of her eligibility.

“Casey Traill is a natural born leader, plain and simple,” said Spartans head coach Tim McAuliffe. “Every day she brings with her a combination of comedic relief paired with unmatched intensity and scrutiny over her own game. She shows up day in and day out wanting to get better, and expects her teammates to do the same. She’ll never ask from a teammate anything that she isn’t already doing herself, and that’s what makes her an effective leader. On the ice, she skates as well as any defender I’ve coached, almost effortlessly with an ability to go end-to-end seemingly at will. I think Casey will have a long future in hockey, and I can’t wait to see what that will entail.”

The Beauts were the youngest team in the NWHL last season and Oliver hopes the balance between veterans and a growing group of newcomers can help build success.

“When you have veterans that can show newcomers the ropes and make them feel wanted and welcome and supported it just leads to everybody performing at their very best on the ice,” he said. “It’s nice to have a good blend of all different types of players from different backgrounds and different experience levels.”

Since 2015 the Beauts have selected a total of 32 players in the NWHL Draft including 17 forwards, 13 defenders, and twogoaltenders.

The inaugural NWHL International Draft will be held on July 25 with the Beauts holding the first overall selection.