There’s no denying that the New York Islanders used one of the most unique fonts when they introduced their Fisherman jerseys in 1995. Having worked in a sports retail store, I know that the company who did the customization always hated doing Fisherman customizations due to the difficulty, but the Islanders decided two seasons of these jerseys were enough torture for everyone. From the weird angle of the horizontal part of the “A” not matching the other horizontals in letters to serifs on letters, it was truly a unique font. 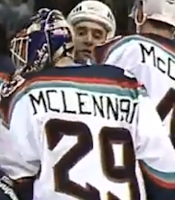 And that brings us to today’s finding thanks to Jamie McLennan retweeting a video of the Fisherman-clad Islanders congratulating McLennan after a win while he played with the Islanders. If you look closely at the screengrab from the video to the right, Bryan McCabe is standing to the right of McLennan in the celebration and it’s pretty clear that the “C” in the “Mc” part of their names are different sizes! Normally, we see equipment managers making things easy on themselves by replicating the same styles for all names in the team’s chosen font, but it seems as though Jamie McLennan didn’t get the same treatment as Bryan McCabe! This needed a little investigation, so let’s dig into this name mystery!

What makes Jamie McLennan’s name special is that it seemingly was changed between the two sizes of “C” throughout his career while playing on Long Island. Jamie McLennan played 56 games for them from 1993-96, so the Fisherman jerseys, seen to the left from Game Worn Auctions, would have only been worn for one season by McLennan before he moved on to St. Louis. The good news? The names were consistent across both the home and road jerseys for that season of Fisherman madness for McLennan. The bad news? The Islanders were wholly inconsistent from their old jerseys to these new Fisherman jerseys with respect to the treatment of Jamie McLennan’s name. And I struggle to understand why this would be when it was pretty clear that the old jerseys had it right.

This is the jersey that Jamie McLennan wore in 1993-94 as per Game Worn Auctions, and you can clearly see the Islanders gave him a small “C” in his last name for that campaign where he appeared in 22 games. In seeing that, it begs the question why the Fisherman jersey, worn by McLennan in 1995-96, didn’t have that detail carried forward by the team. They also added that second layer of curiosity by giving Bryan McCabe the small “C” as seen above. It makes one wonder what the equipment staff were thinking in that Fisherman-crazed season.

Where things get really murky is when we consider the case of teammate Marty McInnis. McInnis played for the Islanders from 1991 until 1997, so he was a teammate of Jamie McLennan for three seasons. The top jersey on the left is what McInnis wore in 1992-93 with his name properly rendered with the small “C”. Below that is a screengrab of a fight that McInnis had on November 7, 1995 against the Vancouver Canucks, and it’s pretty easy to see that he too is wearing the small “C” on the Fisherman jersey just as Bryan McCabe was! For whatever reason, it appears that Jamie McLennan is the exception to how the McNames should be rendered on the back of those jerseys despite him playing the previous two seasons on Long Island with a small-“C” last name on the back of his jersey.

The only other McNames or MacNames to play with the Islanders during the Fisherman years were Mike MacWilliam who suited up for six games and David McLlwain who suited up for four games. Neither player had games of their careers in those short stints with the Islanders, so photos of their names on the back of Fisherman jerseys are likely lost to history at this point. I wanted to see if the trend for non-goalies getting the proper treatment on their names continued, but we’ll likely never know at this point.

In any case, it seems very odd that the Islanders would properly apply both Bryan McCabe’s and Marty McInnis’ names on their jerseys with the small “C” while Jamie McLennan didn’t get that same respect despite him getting that respect in previous seasons. Like the curious case of Thomas Steen wearing “T. Steen” when no other Steens played for the Jets, this might just be one of those jersey quirks seen years ago that no one noticed until now. It’s little peccadillos like this that make me appreciate hockey history even more!