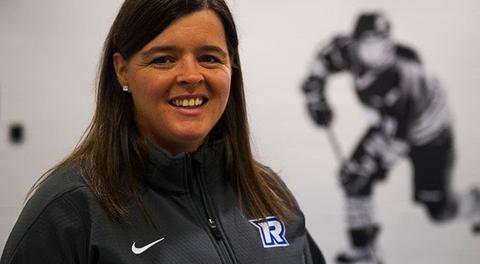 The 2021 NWHL Draft takes place tonight where 30 players will be selected over a five-round process. For the first time in league history, the draft will be presented live on Twitch with a special Draft Show beginning at 7:00 p.m. ET at twitch.tv/NWHL.

In April the NWHL appointed Lisa Haley its Senior Vice President of Hockey Operations. One of her primary responsibilities is overseeing the NWHL Draft.

Here’s what Lisa has to say as the clock counts down to the first overall selection:

What makes the NWHL Draft such a special event?

I believe the NWHL Draft is one of the most important days of the year simply because players are the most important part of our league and they are what makes the NWHL so special. This is an opportunity to celebrate 30 athletes who are achieving a significant milestone in their professional hockey careers. It gives our teams a chance to add talent to their Season 7 rosters and for fans, it’s a chance to get to know some of the players who will hit the ice when we return to play in the fall.

What’s been the most challenging part of this year’s process?

This has been a unique season because of the COVID-19 pandemic and it’s certainly affected the NWHL Draft process. A lot of NCAA and U SPORTS programs are offering their 2020-21 senior year players an extra year of eligibility under scholarship. The intent of the NWHL Draft is to provide a vehicle for graduating collegiate players to enter the league so by virtue of these unprecedented circumstances a lot of athletes are forgoing the opportunity to turn pro because of their option in many cases to return to their collegiate programs. With that being said there are still a lot of players who are ready to take the next step in their professional hockey careers at this time.

How do teams know who they should select?

Over the past several weeks I’ve been communicating regularly with coaches from NCAA Division I and U SPORTS programs to try and determine what their rosters will look like for next season and get a sense of which senior players will not be returning and who might be interested in turning pro. From their feedback, I’ve built an internal list of players that has been shared with our teams. It’s not necessarily a comprehensive list but an extra resource to assist teams with their draft preparations. This season we also introduced an online registration portal where prospective players could indicate their interest in being selected in the NWHL Draft and any players determined eligible were added to our list.

Who are some of the top prospects that might be selected?

There are a lot of great players who will be selected in the 2021 NWHL Draft. Based on my familiarity with U SPORTS I know players such as Kennedy Ganser (University of Alberta), Taylor Davison (York University), and Olivia Atkinson (Concordia University) are interested in embarking on professional opportunities. When I coached Canada at the World Under-18 Championship we lost to a United States team with players like Mak Langei (Bemidji State University) and Taylor Wente (University of Minnesota) who are graduating from their respective NCAA programs and would be impactful at the next level. I also hear great things about players like Caroline Ross (Colgate University), Finley Frechette (Cornell University), and Taylor Girard (Quinnipiac University) to name a few, and am excited to see how things unfold for them and for others.

What’s your message to prospective players?

I want to wish all players the best of luck in the NWHL Draft. It’s a tremendous accomplishment to be selected and something to celebrate with family and friends who have supported you and the coaches and teammates who have played a role in your development to this stage. For anyone who is not selected, there are still opportunities to continue your professional career through free agency. The NWHL is a growing league and you are all part of building the future of professional women’s hockey in North America. We are committed to providing leading opportunities for our athletes and offer enhanced player benefits to everyone who competes in the NWHL. To learn more please visit https://www.nwhl.zone/player-benefits.