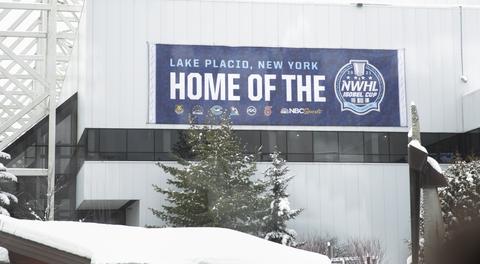 After nearly a year with no NWHL hockey (321 days, but who’s counting?), six teams will descend on Lake Placid to create the league’s very own N-Dubble. From January 23 to  February 5, teams will be playing in a tournament-style regular season, concluding with seeding games and a winner-takes-all Isobel Cup Final.

As much as we can talk about how rosters look on paper, this season is going to be a unique one. Teams have been able to practice on their own, but quick chemistry will be critical when your regular season is only five games long. In a normal year, teams may see each other half a  dozen times; here they’ll have just three periods to get used to their opponents and make any necessary adjustments.

Here’s where each team stands going into the bubble:

Of all the seasons to join the NWHL, Toronto picked an interesting one. Sure, the team is new and might not have the same chemistry as other, more established squads. That said, there are a lot of players on this team who have played with each other or for head coach Digit Murphy,  so some of that chemistry may already be there.

Despite being new to the NWHL, there are a lot of players on the Six who will be familiar to women’s hockey fans. Shiann Darkangelo, Elaine Chuli, and Emily Fluke are all well-known names with pro hockey experience who should shine for the Six. It helps that they have another well-known name behind the bench: head coach Murphy is as experienced as they come. Also worth watching are Taylor Woods, Mikyla Grant-Mentis, Emma Greco, and Emma Woods;  all four have the talent and experience that could provide depth for their team.

This could be said for every team, but chemistry is going to matter. A few members of this squad have played for Murphy before, and their ability to merge with the rest of their teammates will be what makes or breaks this season. Toronto has the talent to keep up with teams like Boston and  Minnesota – the question for them this season is how quickly they can gel together on the ice.

If you were to look for a favorite going into this season, the Pride are at the very top of the list. A  perennial powerhouse that qualified for the Isobel Cup Final the last year, the Pride has unfinished business to take care of this year.

The Pride has a star-studded lineup featuring NWHL All-Stars Jillian Dempsey and McKenna  Brand, defender Kaleigh Fratkin, and the legendary Lovisa Selander between the pipes. But it’s not just the veterans you should be keeping an eye on. Rookies like Sammy Davis and Tereza  Vanišová could bolster an already deep bench for the Pride.

Boston fans should know BU alum Davis, the 2019 Beanpot MVP. Davis has earned nearly every Hockey East award you can win, apart from best goaltending (and we wouldn’t put it past her, either). She’ll fit right in on the Pride’s bench.

Meanwhile, Vanišová had a solid career at the University of Maine and has also represented the  Czech Republic at both the U18 and senior team level for nearly a decade. Playing against high-level opponents at the national level should help her adjust quickly to playing in the NW.

On paper, the Pride should cruise through this season to the Isobel Cup Final. But the key for  Boston will be a solid 60 minutes every game. We’ve seen in the NWHL before how one lapse in concentration can spell disaster for a team, and that’s only going to be magnified with the shortened season. If the Pride can stay cool, calm, and collected, they’ll be hard to beat.

Like the Pride, the Whitecaps are coming into the season with something to prove. The 2019  Isobel Cup champions were going for the repeat before Covid-19 cut their season short, and are poised to go on another championship run with some familiar faces.

As scary as it sounds, the Whitecaps only got better during the offseason. Once the face of the  Beauts, forward Corinne Buie has taken her talents to the Whitecaps and added more depth to their roster, along with former Beauts teammate Sara Bustad. Those two will join returning stars like Jonna Curtis, Allie Thunstrom, and Audra Richards, to name a few. Oh yeah, and Amanda  Leveille will be between the pipes. Scared yet? You should be. This whole roster is terrifying in the best way.

Here’s the thing with Minnesota – as far as their skaters are concerned, they have the depth that rivals any other team. But their goaltending situation is much more precarious. Leveille is a bona fide superstar between the pipes, but this season has a lot of games in a very short window, and if she gets injured, that’s a huge loss for Minnesota. Allie Morse will likely get in a couple of games for the Whitecaps, whether it’s replacing Leveille or just giving her the night off. If she plays well,  Minnesota will be all but unstoppable.

Whale, whale, whale (I’m sorry, I had to), this is shaping to be an interesting season for  Connecticut. The Whale have tended to struggle against deeper and more skilled teams in the past, but this year they’ve added some interesting free agents alongside their existing core,  setting them up to be a dark horse contender this year.

Players to watch: Besides the leadership core that the Whale will undoubtedly be leaning on –  Shannon Doyle, Janine Weber, Elena Orlando, and Emma Vlasic – a key player will be Alyssa  Wohlfeiler, who put up 16 points in 14 games with the Pride last season. Connecticut has struggled to score in years past, so players like Kaycie Anderson, Shannon Doyle, and  Wohlfeiler will be looked to lead the offensive charge.

Goaltending has always been a strength of the Whale, and the tandem of both Abbie Ives and  Brooke Wolejko could be hugely important. During a season with such a condensed schedule,  having two goalies to split the workload is paramount. Wolejko has NWHL experience, and Ives left Quinnipiac with a career save percentage of .926, third-best in Bobcat history. That said,

Connecticut’s scorers will need to step up too – a shutout (knock on wood) can only get you so far if you can’t score.

The Riveters are back and got even grittier (I didn’t think it was possible either). The Rivs are a  team that has slowly but surely added depth and talent to create a really solid, dependable lineup that will be fun to watch.

The Riveters brought back fan favorites like Madison Packer, Kiira Dosdall-Arena, and Kendall  Cornine. But GM Kate Whitman Annis and head coach Ivo Mocek were busy during the offseason, picking up some new recruits to bolster their lineup. Joining the Rivs this season is  Emily Janiga, who spent time with the Buffalo Beauts and the Vanke Rays, as well as noted pest  Kelly Babstock, who has been a thorn in the Riv’s side for years now. It goes without saying that  Metropolitan is grateful to be playing with her and not against her this season.

Also worth watching: blueliner and Yale graduate Saroya Tinker, the first-round pick of the  Riveters in last year’s draft, and Rebecca Russo, a speedy forward who returns to the Riveters after not playing last season.

And though the beloved Ashley Johnston won’t be on the ice this year, don’t worry – she’ll be behind the bench this year as an assistant coach.

For the Riveters, it’s going to come down to stay out of the penalty box. Players like  Babstock and Packer play with an edge, but too many penalties could sink the Riveter’s season before it really gets going. That said, if their penalty kill is up to the task, the Rivs will be a fierce opponent no matter who they’re playing.

The Beauts are coming into this season as a bit of an underdog (seems like I say that every season). They lost their captain, Corinne Buie, to the Whitecaps during the offseason, and then got hit again when their new captain, Taylor Accursi, announced she wouldn’t be able to play in the bubble due to work obligations. That said, if there’s one thing we’ve learned during the  NWHL’s six seasons, it’s to never count Buffalo out of anything.

Though the team is going to hang Accursi’s jersey in their locker rooms, the pressure is on returners like Lenka Čurmová, Iveta Klimášová, Brooke Stacey, and Marie-Jo Pelletier to step up their games to help fill her skates. The talent is there for the Beauts – the main question will be is if they have the depth, particularly if injuries come up.

Lisa Chesson is back with the Beauts this year, which should be a huge help on the blue line.  Another player we’ll be keeping an eye on is Autumn MacDougall, who’s coming to the NW after four seasons playing for the University of Alberta; she’s the first USports player to get drafted by an NWHL team.

Goaltending, goaltending, goaltending. The trio of Kelsey Nuemann, Carly Jackson, and Caty  Flagg will have their work cut out for them; Jackson and Flagg are both rookies coming straight from the NCAA, and though Neumann has been in the NW for a few years, last season was the first where she saw a regular workload, playing 10 games for Buffalo. There’s not a lot of room for mistakes this season, so the Beauts will have to hope that whoever is between the pipes is a  quick learner.

Fans can watch all of the regular season and playoff seeding games on Twitch, the NWHL’s streaming partner. The two Isobel Cup Semifinal games and the Isobel Cup Final will be aired by NBCSN for fans in the U.S. and will be globally streamed on Twitch.