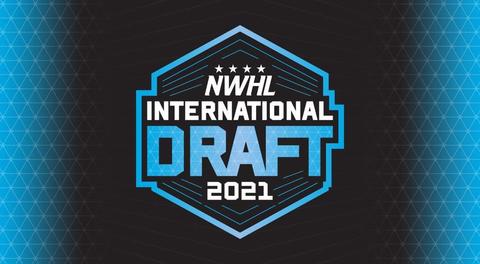 “Hockey is a global game and the NWHL International Draft is another example of the league’s commitment to growing professional women’s hockey,” said Lisa Haley, NWHL Senior Vice President of Hockey Operations. “It’s exciting to provide a new gateway for players from around the world to pursue opportunities in the sport and continue strengthening the level of incoming talent to our league.”

The NWHL International Draft is for players born outside of North America who are at least 21 years of age on or before September 1, 2021 and have not previously played in the NWHL or consumed any eligibility at the NCAA or U SPORTS level. Unselected players immediately qualify for free agency on July 26 beginning at 9:00 a.m. ET. Teams have a two-week window to exclusively sign their picks to 2021-22 contracts, with unsigned picks eligible for free agency on August 9 beginning at 9:00 a.m. ET.

The Buffalo Beauts will select first overall in the 2021 NWHL International Draft followed by the Connecticut Whale who will choose second, the Boston Pride third, Toronto Six fourth, Metropolitan Riveters fifth, and the Minnesota Whitecaps who will make the sixth and final pick of the process.

In six seasons a total of 21 international players including 12 forwards, six goaltenders, and three defenders representing 11 countries have competed in the NWHL with six of those players lacing up during the 2021 campaign. Three players from international countries were also selected in the 2021 NWHL Draft from NCAA programs including Czech and British defenders Anna Zíková and Casey Traill to Buffalo, and Russian defender Daria Tereshkina to Toronto.